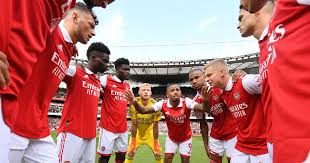 Intriguing team news is hinted at in Takehiro Tomiyasu’s most recent Instagram post before of Arsenal’s Premier League matchup versus Chelsea.

Takehiro Tomiyasu’s participation in Arsenal’s match versus Chelsea was in question.

If Arsenal defeated FC Zurich and matched or beat PSV’s result, they would have won their Europa League group. With a 1-0 victory over the Swiss team, the Gunners have secured first place.

Takehiro Tomiyasu’s injury late in the game during Thursday’s Europa League triumph against FC Zurich was one of the few drawbacks. Despite being a substitute, he was removed after only a few minutes because of a muscular injury.

Hot Post:  Chelsea has no justification for not being among the top four – Conte states reasons

Mikel Arteta stated of Tomiyasu’s injury: “We don’t know. Because we don’t want to take any chances, he had a muscular problem and had to be taken off. But in the following 48 hours, we will evaluate him and decide what is best to do next.

Before today’s Chelsea game, this cast suspicion on him. But according to his most recent Instagram post, he might unexpectedly be in line to feature for the Gunners against their London rivals.

On his birthday on Saturday, Tomiyasu uploaded a photo of himself wearing the away jersey of Arsenal. The Japanese foreigner seldom ever posts on Instagram; his most recent update, which before his birthday announcement, was made over a month earlier.

Hot Post:  He was a great help to us - Potter praises a specific Chelsea player.

It might have given away that Tomiyasu is available for selection that Arsenal will play Chelsea away the following weekend. Given that he recently replaced Kieran Tierney as Arteta’s first-choice left-back, this would be a huge win for the Gunners.

Mikel Arteta hasn’t utilized Tierney recently because he prefers Tomiyasu as his left-back option. When Tierney was replaced by Cedric Soares, a natural right-back, to play left-back against Nottingham Forest last Sunday, it added salt to his wounds.

But Tierney had his chance to win over the Arsenal manager in the game against FC Zurich, and he accomplished just that.

Hot Post:  Despite declaring his retirement, Chelsea star is called up to the national squad again

He stood out among a team that struggled throughout the game, and it was his goal that gave the Gunners the victory in the Europa League.

With Oleksandr Zinchenko also making his comeback from injury, this undoubtedly sparked discussion about who should be the number left-back option moving forward. Since Tomiyasu was thought to be injured, Arteta’s choice of who to start at left-back against Chelsea appeared to be a simple one, but his most recent social media post may indicate that he is still a viable option.