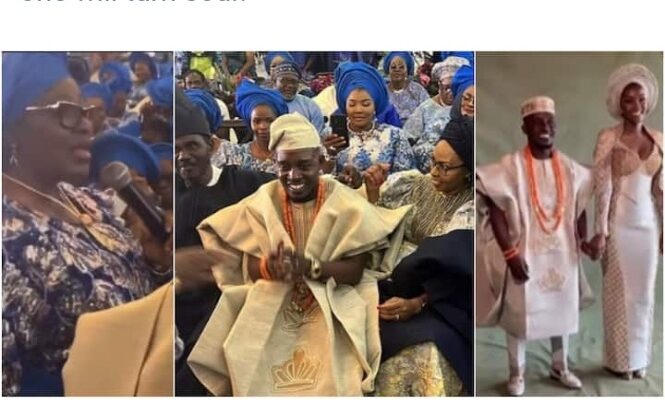 The rapper was prayed for by the Alaga, who hoped that only his wife’s breast would satisfy him and that all others would turn sour.

Although the woman and the other guests recited the amen in unison, MI was persuaded to say it despite his initial reluctance.

The video has been making the rounds on social media, with Nigerians sharing mixed reactions to it.

Hot Post:  On his 83rd birthday, Alaafin of Oyo's many queens congratulate him.

The rapper was scheduled to go down the aisle, according to Gossipinfo news in April.

The rapper revealed his engagement in a video that also detailed how he met his fiancée and how their relationship developed.

Mi Ababa also mentioned in the video that Audu Maikori had introduced them.

The talented rapper revealed that he would be getting married to the love of his life Eniola Mafe, in 2022 with a heartwarming video with the caption that read:
“So.. Wanted to share that I’ve gotten engaged to @EniolaMafe I’m generally very private with things like this but I wanted to share my joy with you guys. Pray for us… we will need it! Thank you for your support!”.

In a new update, the rapper’s traditional marriage is currently ongoing.

Photos and videos of the wedding are already making rounds on social media. The rapper was seen looking dapper with his Yoruba-wedding attire and coral beads. MI Abaga was all smile as he posed for the gram.

As expected, celebrities stormed his wedding to show support to him as he ties the knot.

Spotted at the event are Banky W, Ik Osadiouwa, Basket Mouth and more.

Many people were envious of the stunning couple who won over hearts by announcing their engagement.

Eniola Mafe said how she was going about her daily routine when Audu Maikori, a friend they both shared, introduced her to the musician.

Eniola had already vowed not to wed a rapper, but as fate would have it, she fell in love with him, and their relationship has since developed.