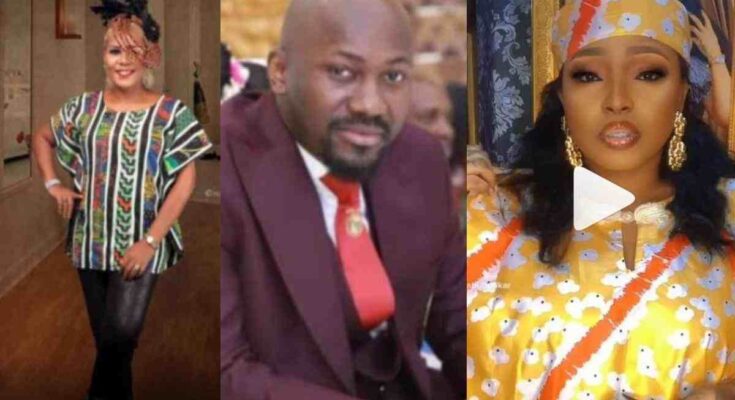 Shan George, a Nollywood actress and filmmaker, may be remaining silent on social media due to Halima Abubakar’s constant drama with her, but the actress is frightened.

Hours ago, Halima, who had been absent from social media for weeks, returned. She was pulling the veteran and a clergyman by the name of Apostle Johnson Suleman.

Halima Abubakar tweeted screenshots of what appeared to be a dialogue between Shan George and the cleric, reigniting their feud.

Apostle asked Shan George if Halima had any proof against her in the chat, to which Shan George responded that the actress isn’t smart enough to hold any.

She blew hot at Shan George and demanded to know why the actress was pursuing her.

Halima Abubakar threatened to spill more about her relationship with the clergyman.

God bless you all till infinity your care and love is overwhelming.. I will see you soon. God is Good. Pls be careful with friend & co workers, they love no one I use to call her mami. Why you still ffing me? Thank God I never took any thing from you. Shan you said I had cancer 4 years ago, of which you denied and apologize. Did I tell you, I don’t know where my problem is from? You calling me names again. Imagine both of you. Johnson you want war? I will give you war. Try and bring my page down. E go shock you”.

In another post, Halima advised the actress to quit defending him as she would regret her actions.

Noting how the actress has kids, Halima stated that the Apostle would do her worst.

“You have kids Shan. He would do you worse”.

Early this morning, Halima Abubakar leaked a chat of Shan George expressing fear over her outbursts.

In the leaked chats, Shan George had questioned someone, whose identity remains unknown, on Halima’s recent post.

Tagging the actress a crazy girl, she stated that she had been trying to reach the Apostle but he wasn’t picking her call.

Shan George revealed that she was going insane over Halima’s Instagram stories.

“Hey babes did you see what this crazy girl posted on IG story, been trying to call apostle and he hasn’t been picking up. I’m going crazy and pls how did she get our conversation. I’m confused let’s try and see tomorrow as early as possible and see how we can resolve this I’m going insane (chech her IG story though”.

Hot Post:  ‘I dated him because he said he was separated’ – Halima Abubakar speaks on relationship with Apostle Johnson Suleman

She advised her to keep calling the apostle as she isn’t backing down.

“Shan George you are wicked. But you go hear am! Keep calling him o”.

Halima Abubakar went on to share more chats of Shan George talking negatively about her.

In another post, Halima vowed to make her and Apostle’s lives miserable.

“Shan George wake up. Thank God for life. How our man? I will sure make both of you miserable”.