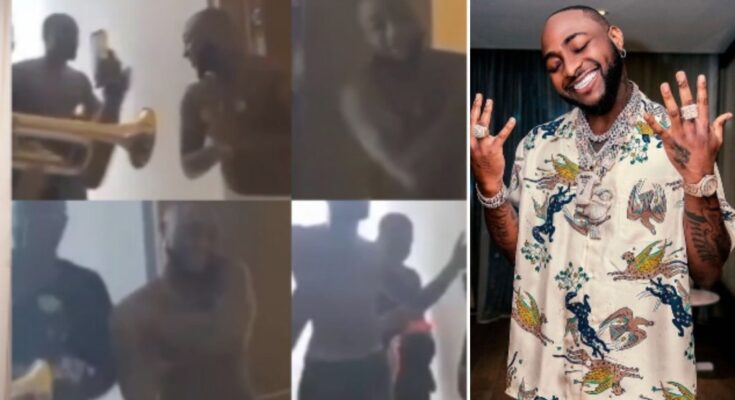 The 30BG (30 billion gangs), the group of Afrobeats superstar Davido, surprised him on his 30th birthday.

The musician, who turns one year older today, November 21st, has been showered with affection by his staff.

Despite losing his son, the 30BG managed to keep a grin on his face.

His crew surprised him with an instrumentalist, as seen in a video that was shared online.

When his gang knocked on his room door, Davido was just getting out of the shower and could be seen spreading cream while wearing a bathing robe.

The now three-times father was undoubtedly shocked and moved by their thoughtful act.

Before the unfortunate loss of his son, Davido had made a special announcement on his birthday.

Hot Post:  "The world will miss me soon" Actress Kemi Afolabi Reveal how she do spends N1.2million weekly on medications to survive after being given just 5 years to live (Video)

The singer revealed his desire for his 30th birthday on November.

Davido stated via his Instagram story that he wanted his birthday gift this year.

We aren’t sure the singer would be needing any gift this year, following his son’s untimely death.

A source close to the singer, prior to his birthday, stated that Davido wouldn’t be celebrating his birthday.

Hot Post:  I'm ready to marry anybody, I can even marry an old man - Actress Imade Osawaru Reveal.